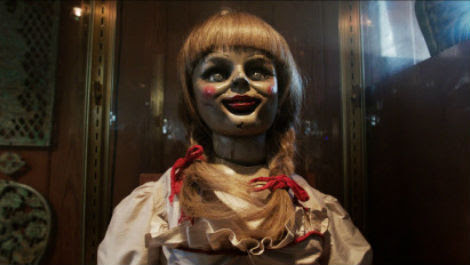 
Gone Girl
Director: David Fincher
Stars: Ben Affleck, Rosamund Pike, Neil Patrick Harris, Tyler Perry
Why? Count me in for anything directed by David Fincher.  That he is once again using Trent Reznor for the score is just icing on the cake.


Annabelle
Director: John R. Leonetti
Stars: Ward Horton, Annabelle Wallis, Alfre Woodard, Tony Amendola
Why? Did you not see The Conjuring?  I think focusing on one particular element that was in the background of the other movie makes for an interesting prequel.


Whiplash
Director: Damien Chazelle
Stars: Miles Teller, Melissa Benoist, J.K. Simmons, Paul Reiser
Why? Normally this movie wouldn't interesting me, but I had the privilege of seeing the short film that it is based on last year when local theater Sun-Ray Cinema carried the 2013 Sundance Short Films.  While I know I've seen plenty of films based on shorts, I believe this will be the first time I've seen the short film first.  I'm interested to see how the story was expanded.


Birdman or (The Unexpected Virtue of Ignorance)
Director: Alejandro González Iñárritu
Stars: Michael Keaton, Zach Galifianakis, Edward Norton, Andrea Riseborough, Emma Stone
Why? This movie looks bizarre in the best possible way.  I can't quite figure it out, and that really interests me.  Plus, Michael "I'm Batman" Keaton!!


Ouija
Director: Stiles White
Stars: Olivia Cooke, Ana Coto, Daren Kagasoff, Bianca A. Santos
Why? This isn't the first horror movie we've seen Olivia Cooke in this year, and she has yet to fail to deliver.  Plus, this looks genuinely creepy even though I really don't need anymore convincing to not buy a Ouija board.


John Wick
Director: Chad Stahelski
Stars: Keanu Reeves, Bridget Moynahan, Willem Dafoe, Ian McShane
Why? I'm a sucker for anything starring Keanu, and I love it when he gets badass roles like this one.


Nightcrawler
Director: Dan Gilroy
Stars: Jake Gyllenhaal, Rene Russo, Bill Paxton, Anne McDaniels
Why? Although this movie has nothing to do with the blue-skinned, teleporting X-Men character it still looks really really good.


Before I Go To Sleep
Director: Rowan Joffe
Stars: Nicole Kidman, Colin Firth, Mark Strong, Anne-Marie Duff
Why? Not feeling paranoid enough?  Well, then this movie is just for you. I mean, who do you trust when you have no memory of your own?


Why? Solve your girlfriend's murder or turn into evil itself?  Sounds like an original concept to me.