Editor's Note: I'm disappointed with the lack of horror movies in the theater this October. No Paranormal Activity. No Saw. It's 2013, and the best we could do was another remake of Carrie??  Come on. Let's hope Insidious Chapter 2 has a nice long theater run.

Friday, October 4th
Gravity
Director: Alfonso Cuarón
Stars: Sandra Bullock, George Clooney, Ed Harris, Orto Ignatiussen
o    Why? I don't know. Maybe. I mean, sure, it's a scary situation. How horrible.  But, it feels like it could end up being a space version of Open Water.

Friday, October 11th
Machete Kills
Director: Robert Rodriguez
Stars: Danny Trejo, Alexa Vega, Mel Gibson, Jessica Alba
o    Why? I'm sure that Tom Hanks movie is going to be great, but this sequel filled with over-the-top violence, hot chicks with machine-gun bras, and Amber Heard is the one for me. 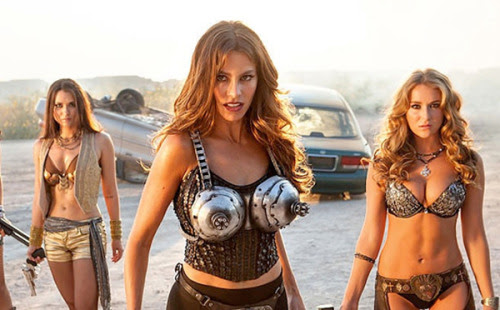 Friday, October 18th
Carrie
Director: Kimberly Peirce
Stars: Chloë Grace Moretz, Julianne Moore, Judy Greer, Ansel Elgort
o    Why? I recently watched the 2002 remake with a bit of skepticism, but I was surprised by what they were able to tweak without screwing up the core story. After that experience, I'm more curious to see what they are doing this time.  I'm also a fan of Chloë Grace Moretz' previous films.  And since Judy Greer is in it, if it ends up sucking, I can just close my eyes and pretend it's a lost episode of Archer.

Escape Plan
Director: Mikael Håfström
Stars: Sylvester Stallone, Arnold Schwarzenegger, 50 Cent, Vincent D'Onofrio
o    Why? I recently saw the trailer for this, and, even though I didn't waste time on Expendables 2, I'm looking forward to this.

Friday, October 25th
Bad Grandpa
Director: Jeff Tremaine
Stars: Johnny Knoxville, Jackson Nicoll, Spike Jonze, Georgina Cates
o    Why? Even though I skipped the last few Jackass movies, I'm really looking forward to this. I especially like how they are digging on those exploitative pageants for young girls.


o    Why? With that director and that cast, it's tough to go wrong.