My second and last Days Of The New concert 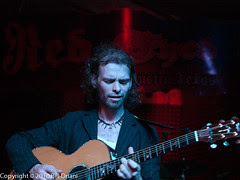 The first time I saw Days Of The New in concert was great. I believe it was last year or 2010.  I had only heard a few of their songs, which were favorites of mine, so being exposed to more of their catalog in a live setting was terrific. Travis Meeks is very talented on the guitar. After that show, I bought their first two CDs (and attempted to find the 3rd at a reasonable price) and decided that I wanted to see them again if they came back to town.

One concert date was announced and then cancelled.  I believe that a second was also cancelled.  Finally, they came back to town this past weekend to the same venue as before, Brewster's Pit.  Once it was time to start setting up, it took about the usual amount of time to move equipment around and sound check the microphones. But then stuff had to be moved around on stage because there wasn't room for all of Travis' guitars.  I believe, without exaggerating, that he must've had 7 different guitars.  Granted, I'm not a musician, but isn't that a bit much?  I mean, I've seen guitarists switch between 2 or maybe 3 guitars before, but this seems a little extreme. At least whenever Hurt was in town, the lead was switching between different stringed instruments, such as the violin, guitar, and some others I didn't recognize.  But 7 guitars?  Really?

And you know, all of those guitars had to be tuned, so we had to wait even longer.  Fortunately, he started off with one of my favorite songs. With a few lesser known tracks mixed in, he actually got to the other two more commonly known songs without making us wait for an encore.  Unfortunately, it seemed like almost every time he'd switch guitars between songs, there would be extra time spent tuning the guitar. I don't remember it taking so long between songs last time.  I gave him an hour of my time, and then I split.  It definitely wasn't as exciting as the first time, so I don't think I'll be back to their show if they come to town again.