Robert Knepper reprised his role as 'Theodore "T-Bag" Bagwell,' inmate at Fox River Prison, for this episode.  He originally played this role on Prison Break.  Since Prison Break, he has also played the role of 'Samuel,' the owner of the carnival, on Heroes. 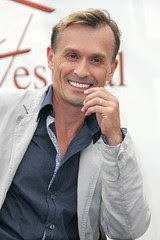 Chuck - "Chuck Versus The Muuurder"

David H Lawrence guest starred as 'Marvin' from LargeMart.  Heroes fans will recognize him as 'Eric Doyle,' the puppet master.