Rick Gonzalez guest starred as 'Raul Campos,' the fighter who was friends with 'Cal' that got shot at the beginning of the episode.  Reaper fans will recognize him as 'Ben.' 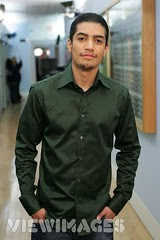 Lola Glaudini guest starred as 'Justine Marino,' the US Marshall.  If you've been watching Persons Unknown, then you'll recognize her as 'Kat Damatto'; however, before that she was on Criminal Minds as 'Elle Greenaway.'