Chuck - "Chuck Versus The Three Words"

Vinnie Jones guest starred as 'Karl Stromberg,' the arms dealer. You may recognize him from his roles in some of the great movies he's been in: 'Big Chris' in Lock, Stock and Two Smoking Barrels; 'Bullet Tooth Tony' in Snatch; 'Mad Maynard' in Eurotrip; 'Juggernaut' in X-Men: The Last Stand; and 'Mahogany' in The Midnight Meat Train - just to name a few.

Vinnie Jones monologue in Snatch [click here or watch below]

Nick Chinlund guest starred as 'Eddie,' the drug dealer. You might recognize him as 'Toombs' from The Chronicles of Riddick or 'Tim' in Training Day, but he also played the role of 'Major Ellis' on two episodes of Buffy The Vampire Slayer.

Sasha Alexander guest starred as 'Nora,' the tenant that thought 'Wilson' and 'House' were gay.  Dawson's Creek fans might remember her as 'Gretchen Witter,' one of Pacey's older sisters.

Castle - "A Rose For Everafter"

Alyssa Milano guest starred as 'Kyra Blaine,' the bride-to-be and Castle's "the one that got away." Since she's so popular, it's tough to point out just one thing you might remember her from; however most recently, she played the role of 'Billie Cunningham' on My Name Is Earl. Also, next time Commando comes on cable, watch for her since she played 'Jenny Matrix,' the daughter of Arnold Schwarzenegger's character.

Eva Amurri guest starred as 'Sharra Kelly,' the bride who was diagnosed with ovarian cancer. Californication fans will recognize her as 'Jackie,' Hank's student who also worked as a stripper.

Jennifer Hasty guest starred as 'Samantha Malcolm,' the crazy chick who collected petite women as dolls. Bones' fans will recognize her as 'Pam Nunan,' the crazy woman who shot 'Booth' in the penultimate episode of season 3.

Jonathan Frakes guest starred briefly as 'Dr. Malcom,' Samantha's father. Of course, you know him as 'Commander Riker' or "Number One" from Star Trek: The Next Generation.

Kai Lennox guest starred as 'Marvin Breekman,' the UFO enthusiast who found his girlfriend's corpse in the desert. If you watched The Unsusuals on ABC, then you may recognize him as 'Detective Eddie Alvarez.' 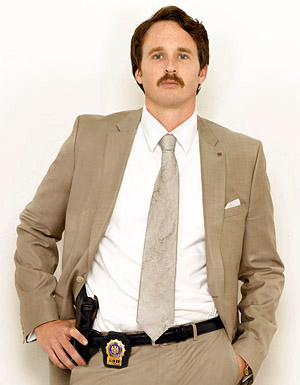 Callum Blue guest starred as 'Edward Forsythe,' the rich guy who stole the Makri spider to control Big Bertha. Smallville fans will recognize him as the current incarnation of 'Zod,' but not too long ago, he was 'Alex' Hannah's short-lived boyfriend on Secret Diary Of A Call Girl.