Felicia Day guest starred as 'Ms. Angela,' the 3rd grade teacher. Felicia is popular for many things, especially online. She stars as 'Codex' in an online series (that she created) called The Guild. She also plays the role of 'Fairy' in the very funny The Legend Of Neil. She also starred as 'Penny' alongside Neil Patrick Harris and Nathan Fillion in Joss Whedon's Dr. Horrible's Sing-Along Blog. And that's just her online work. If you bought season one of Dollhouse, then you got to see her play 'Mag' in the unaired episode "Epitaph One," a role that she'll be reprising in the series finale, "Epitaph Two: The Return."  One of the earliest places you may recognize her from, though, is Buffy The Vampire Slayer, where she played the role of 'Vi,' one of the potentials. 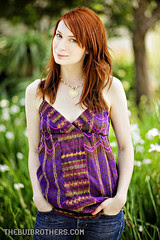 Note #2: With TV programming being pretty sparse over the holiday period, this may be the last of these posts until sometime in January.

Email ThisBlogThis!Share to TwitterShare to FacebookShare to Pinterest
Labels: Buffy The Vampire Slayer, Dollhouse, Lie To Me, TV Guest Stars