D.B. Woodside guest starred as 'Lance Carlberg,' the victim's boss at the NY company under his "Jake" identity. He recently guest starred on an episode of Lie To Me; however, he's most recognizable to Buffy The Vampire Slayer fans as 'Principal Robin Wood.' 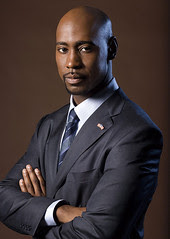