Bored To Death - "Take A Dive"

Michael Chernus guest starred as 'Francis Hamm,' the guy paired up to fight 'Ray.' If you watch Mercy, then you may recognize him as 'Ryan Flanagan,' Veronica's brother that works at the fire station.

Californication - "So Here's The Thing..."

Ken Marino guest starred as 'David,' the guy that 'Felicia Koons' was going to sleep with until 'Hank' decided to do the deed. If you watched Reaper, you may recognize Ken since he played the role of 'Tony.'

Erika Christensen guest starred as 'Dana Harper McPherson,' the spousal abuse victim who went to high school with 'Nurse Sonia.' If you watch Lie To Me, then you may remember that Erika starred in this season's premiere episode as 'Sophie/Trisha/Jessie/RJ,' the girl with multiple personalities. She also helps out with voices on Robot Chicken.

Andrew Airlie guest starred as 'Dr. James Carson,' employee of Massive Dynamic and father of 'Tyler,' the boy who kidnapped himself. Reaper fans will recognize him as 'Mr. Oliver,' Sam's dad. 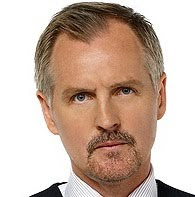 Allison Scagliotti guest starred as 'Jayna,' one-half of the "Wonder Twins." (Anyone catch the reference to the "Hall of Justice" and the picture of Gleek on the cell phone that completed this Super Friends-ish episode?) Warehouse 13 fans will recognize her as 'Claudia Donovan.' She also recently guest starred on the FOX series Mental as 'Heather Masters,' the boy raised as a girl.