After all of the driving around that I did the first part of last week, it was nice to relax most of Thursday, but that evening I headed out again to begin catching up on some movies. I started off catching the 7:50pm showing of ORPHAN followed by a midnight showing of DISTRICT 9. Then on Friday, I caught a 2:30pm showing of (500) DAYS OF SUMMER, a 9:05pm showing of G.I. JOE: THE RISE OF COBRA, and a 11:35pm showing of THE GOODS: LIVE HARD, SELL HARD. Finally, I closed out the weekend on Saturday with a 10:15pm showing of THE COLLECTOR.

I enjoyed them all, but if I had to rank them, I'd put G.I. Joe at the bottom of the list. The rest would be difficult. District 9 and (500) Days Of Summer would both fight very fiercely for the top spot being excellent films of entirely different genres.

Below are mini-reviews of each of the movies in the order that I saw them, with spoilers.

Wow, what a twist at the end! I didn't expect that at all. I expected some kind of Damien/Rosemary's Baby thing, but not a hormone/midget condition. I thought the story was very well written, though, and the back-story for various characters was very nicely revealed little by little as we went along. 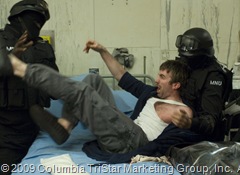 This is not your average science fiction movie. Wow! I mean, you could tell from the movie trailers that something different was going on here. At first, the trailers depicted us interrogating them. Next, we get previews of some kind of alien shanty town that the government bullying the aliens in. You could almost simply stop at giving them kudos for simply having the aliens land somewhere other than America.

From the evolution of the main human character to the depiction of the way the aliens were taken advantage of… It's almost difficult to stop talking about all of the great things about the story that this movie tells. Oh, there actually is some action too, complete with alien ray guns that cause humans to pop like popcorn.

This is a movie where you forget. You forget what you were doing before you got here. You forget what you're planning to do when you leave. You forget that there are other people around you. You relax. You feel like you're at home on your couch, comfortably wrapped up in a blanket. That's how this movie makes you feel, despite the fact that you find yourself alternately smiling and crying.

G.I. JOE: THE RISE OF COBRA

Now, don't get me wrong. G.I. Joe was not a bad movie, but you have to understand a few things. 1) Although I am familiar with G.I. Joe, I did not follow the animated series nearly as loyally as I did Transformers. 2) Look at the quality of movies I just recently saw before this one! It probably wasn't a good idea for me to watch this within 24 hours of District 9 and (500) Days Of Summer. Aside from that, though, I really did enjoy the movie. Marlon Wayans was just funny enough. The relationships between Duke and the Baroness and Cobra Commander were done well. I did think that too much was explained about Snake Eyes' back story. I didn't need to know about his vow of silence. It was fine for it to be a mystery as to why he didn't speak. I think this will be a franchise where the sequel will be able to be better than the first.

The Hangover 2? Not quite, but damn close. This movie was really funny to just cut loose and laugh. Jeremy Piven and company were great, and this time we got not one, but two guys from The Office. It's always a party when Craig Robinson shows up. Honestly, though, I was done after the first few minutes. Ken Jeong's character had a line that caught me so off guard it had me laughing and I just couldn't stop.

I kept waiting for the NIN song of the same name to play during the movie or in the credits, but it never did. I did instantly recognize KoRn when just the intro was played to one of their songs ("Dead Bodies Everywhere").

I really like the way this movie came together. The good guy finds himself compelled to do a bad thing, which leads him to being in this predicament and becoming the unwilling hero. And the Collector guy… damn. Remember how the Freddy vs. Jason movie was like a horror fanboy's wet dream come true?  Well, if there's are sequels to this movie, and I hope there will be, I can just see a clamoring for a Collector vs. Jigsaw movie. That would just be wicked!

…And that is how I spent my summer vacation. The End.