This year was going to be different. I wasn't heading to Tampa exhausted after just getting home from California like last year. I had a relatively new laptop, the first one I've owned for myself and not for work, and I recently because a smartphone owner after acquiring T-Mobile's MyTouch 3G a few weeks ago. I also decided to take a step up and instead of staying at the Red Roof Inn, I made my hotel reservations at La Quinta. 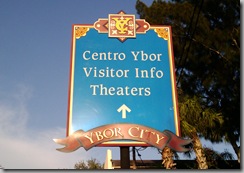 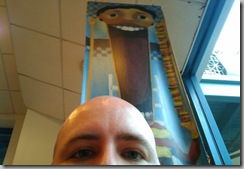 I got off to a late start on Monday, and decided to check out Ybor City when I arrived in Tampa that afternoon. I heard it was the place. It was also near The Florida Aquarium, which I planned to visit, so that worked out as well. I wandered around for awhile, but I didn't really find anything in particular that peeked my interest. It seemed to be a nice place to hang out, but I wasn't planning to hang out there by myself. It was nice to get out and stretch my legs though. I wound up eating at this burger joint called Fresh Mouth. They have great burgers and sandwiches, and they also have some freaky artwork, which you might be able to tell from the banner behind me.

After getting back to the hotel I find that it's not so much of a step up from Red Roof after all since I'm not able to get connected to free wifi that comes with my accommodation. Guess who has two thumbs and spent 30 useless minutes on the phone with the tech support that La Quinta offers?  This guy! 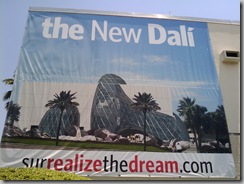 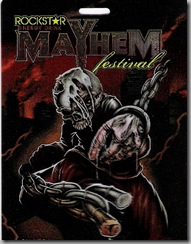 Tuesday morning I need to decide what I'm going to do for the day. This is the day of the Mayhem Festival, but there's no way I'm going to stand out there in that heat all day when 1) there's no one else attending the event that I know and 2) the main reason I'm here is to see Slayer, and they aren't on stage until around 8pm. After having a free waffle in the hotel lobby (what a mistake), I decide on a whim to check out the tourist pamphlets, and the one for the Dali museum catches my eye. I knew immediately what I was going to do.

I really enjoyed checking out the Dali museum. It's a shame that you can't take pictures in art museums, but I totally understand the concept. After spending some time there, I headed back to chill out and grab some dinner before hitting the concert. I showed up at the concert while Bullet For My Valentine was on stage, and once they were finished, I waited for the crowd to clear out then got a decent spot down front before Slayer started up. This was my first time seeing them in concert, and I would definitely enjoy seeing them again. They opened with the opening from their God Hates Us All CD and did quite a mix of their stuff, even performing "Psychopathy Red" from their upcoming release. My only disappointment is that I don't recall hearing any songs from their Christ Illusion CD, since that's the newest one currently out and the one that really got me interested in the band.

I also stuck around for Marilyn Manson's performance, which was really good too. He performed some songs off of his most recent CD, The High End Of Low, and he also perform some of his classics like "Sweet Dreams Are Made Of These" and "Beautiful People."

If you'd like to see the pictures I took from the concert, you can view them in either my MySpace album or my Facebook album.

Speaking of pictures, I hope to one day actually become proficient with my digital camera. Since the flash generally gets caught on the backs of the heads of the bozos in front of me, I decided to turn it off. Seemed like a good idea, but for some reason that impacts the stability/blurriness of the picture. It wasn't until the following day at the aquarium that I found the "anti-blur" setting, but I'm still not convinced it worked all that well.

Now, it's Wednesday and time to head back, but before I do, I wanted to stop by The Florida Aquarium. Who knew we even had an aquarium? I didn't until my sister suggested it to me based upon something that one of her friend's told her. This was quite a sight, and it was a fun way to spend a few hours before heading back home. You can check out the pictures I snapped from my Aquarium visit also either on MySpace or Facebook.

Email ThisBlogThis!Share to TwitterShare to FacebookShare to Pinterest
Labels: concerts