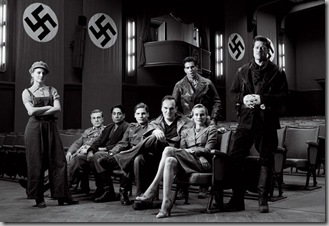 From the moment that the opening credits roll on Quentin Tarantino's movies, you're immediately taken back to another era. You can tell this man makes movies because he loves movies, and Inglourious Basterds is no exception. Take your ADD and shove it! We're going to take some time to actually tell a good story, folks. I hope you're willing to sit through some dialogue and some subtitles.

If this isn't your first Tarantino film, then you know that his strong point is dialogue. However, unlike his earliest film, Reservoir Dogs, you'll find that the off-screen technique isn't used here.  Nazi brutality, that is, brutality against Nazis, is in full display here, and it's glorious! 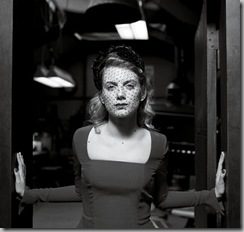 Although some of the plot is provided on the official site, I love how the first chapter of the movie goes into Shosanna's backstory, as sad as it may be. This is a lengthy scene, but it's somewhat reminiscent of the apartment scene with Samuel L. Jackson and John Travolta in Pulp Fiction. Speaking of, I enjoyed how Jackson was used as a narrator in a few instances too. I don't recall any other Tarantino alumni in this movie, so it was nice that he could at least sneak one in.

Eli Roth has been behind the camera long enough directing movies like Cabin Fever and Hostel, so it was amazingly exciting to see him directing by Tarantino bashing in Nazi skulls with a baseball bat as "The Bear Jew."

Unlike many of today's movies, this wasn't a movie that went for everyone getting a happy ending. No, Tarantino is not afraid to kill off main characters. I was shocked when Diane Kruger's double agent character was strangled by Col. Hans Landa (played by Christoph Waltz), the main villain in the movie since he was also responsible for the death of Shosanna's family in the first chapter.

Speaking of, Mélanie Laurent did an AMAZING job playing Shosanna since she met Col. Landa later in life in her French identity. He didn't recognize her since he never got a good look at her years earlier, but she recognized him. When he finally walks away from her, her reaction of releasing all of the emotions she was hiding when talking to him was just incredible. I loved the plot for revenge that she pulled off, too.  It's unfortunate though that 1) she died, which was EXTREMELY shocking, and 2) the man that killed her family wasn't in the theater when it burned.

Col. Landa did get some justice though. I absolutely loved Brad Pitt's Lt. Aldo Raine. To paraphrase, since there's no way I can remember enough to quote exactly:

When you get home after the war, you plan to take off your Nazi uniform, don'tcha? Well, if I had my way, you'd never take it off. I suppose you'd have to take it off sometime, though. Well, imma give you something you can't take off…

At which point he proceeds to carve a swastika in Col. Landa's forehead, which he had done to a few other soldiers he had let go.  Afterwards, he turns to B.J. Novak's character and says, "I believe that's the best one I've done yet!"