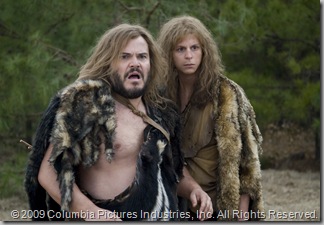 I went to see Year One this evening, and I really enjoyed it. I have to warn you, though, that if if you consider the Old Testament sacred territory, you might want to skip this one. I'll explain more later.

I think that Jack Black did a fine job, but he's almost laughed himself into that Will Ferrell/Martin Lawrence corner. Luckily, the very fresh Michael Cera was there to be funny without even trying very hard. This movie could almost be a Who's Who of comedy. Paul Rudd, Oliver Platt, David Cross, Hank Azaria, Bill Hader, and Christopher Mintz-Plasse all make appearances.

Well, not that this is a serious movie, but let me through up the spoiler flag before I go any further. More after the next picture. 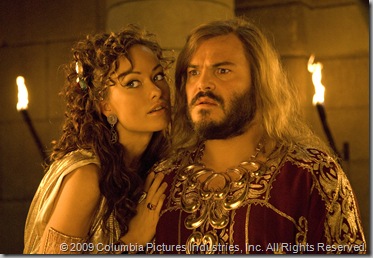 Even though I didn't watch but a few clips online, I found myself too often during this movie knowing what would happen next or at least having a general idea. Luckily, there were still a few unsurprised laughs, though. I expected more to happen when Jack Black's character ('Zed') ate from the tree of knowledge than him just getting kicked out of his village, but his buffoonery causing his village to get captured after he left is a nice explanation for how they met up later.

I enjoyed the scene where David Cross as 'Cain' kills Paul Rudd as 'Abel.' I think that was done really well. I also thought it was funny when they went back home with Cain and met his family, that Zed's all excited about sharing a bed with his sister Lilith but she turns out to be a lesbian. (I don't remember that in Genesis, but it's been awhile since I've read it too.)

The next part that was really funny was having Christopher Mintz-Plasse be Isaac and Hank Azaria be Abraham. Zed and Oh (Michael Cera) walk up and interrupt Abraham attempting to sacrifice Isaac, and Zed claims that he was sent by God to stay Abraham's hand. As it turns out, they are near Sodom and Gomorrah, and this is where their village has been sold into slavery.

In Sodom is where we see some more great casting for this movie: Vinnie Jones. (Well, he shows up before, but I'm not gonna transcribe the whole movie.) I love the part as they are going up to Sodom and Isaac is talking about how he and his friends sneak away for drinks, smokes, and women. When he goes up to the door, I keep waiting for him to bust out a fake ID claiming to be McLovin, but unfortunately, he doesn't.

Oliver Platt is great as the High Priest of Sodom, and he does a fine job of making Oh feel uncomfortable. Poor Michael Cera. No one should have to rub oil on his hairy chest.

Finally, it was great to see Thirteen… I mean, Olivia Wilde as Princess Inanna. It's too bad she was only in the last portion of the movie. I don't think it will be soon enough for them to find her a movie where she can have a larger role.

By the way, as funny as this movie was, nothing seems quite as funny after The Hangover.