Nicholle Tom guest starred as 'Melissa Ranier,' the wife who thought she was pregnant when she really wasn't.  You may not recognize her face but, like some of the initial guest stars on Castle, it's her voice that she's most famous for.  She was the voice of Kara aka Supergirl on both Superman: The Animated Series and Justice League Unlimited. 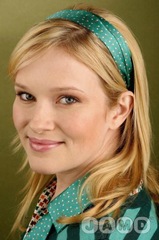