Transformers: Revenge Of The Fallen - review

I was pretty excited about seeing Transformers: Revenge Of The Fallen, so much so that I went to the midnight showing Tuesday night/Wednesday morning. I really enjoyed the movie. I thought it was great. I thought it continued the story well from the first movie. I will say, though, that my opinion is tainted a bit because I read the comic book mini-series that filled in between the two movies. Here are the stories that I read:

In fact, I allowed these comics to collect dust in my room, and I didn't read them until this past week so they'd be fresh in my mind before the movie. Maybe some things didn't catch me off-guard like they did the average movie-goer. I still think it can be enjoyed. I just think that my experience was enriched.

Before I go into any spoilers, I want to cover two points lightly. First, I think that the movie really earned it's PG-13 rating.  I'm just guessing there are some scenes involving Sam that could be a bit much for younger kids.

Second, there seem to be a bunch of haters out there. I mean, there were some for the first movie, but damn, people are seriously attacking this movie. I just don't get it. Why don't movie critics like movies? I mean, why watch movies that you know you won't like? And given that this is a sequel, if you if you didn't like the first one, then why are you bothering with this one?

Remember when you were younger and you used to come home from school or wake up on Saturday mornings and turn on the TV to watch cartoons and let your imagination run wild not thinking too much about anything?  Well, you were happy then, weren't you?  Well, Transformers: Revenge Of The Fallen is 2 1/2 hours for you to not over-think things and watch some giant transforming robots fight for their and our survival?  Did I mention "giant transforming robots fighting"? How cool is that?

Okay, spoilers after the picture.

If you've already seen the movie, hopefully you didn't check out the IMDb page , first.  Of course the regular cast is back, but I sure was surprised to see Rainn Wilson playing the role of Sam's professor. And if having Peter Cullen do the voice of Optimus Prime was so awesome last time, that was nothing compared to being surprised by hearing Frank Welker as the voice of Soundwave. He was the voice of Soundwave in the original 1984 Transformers cartoon, and if you look at his resume, he's a god among cartoon voice actors. I also think it was genius to have Soundwave as a satellite since it no longer made sense for him to be a cassette player. Ravage turned out pretty cool, but I was a little disappointed that they couldn't find a way to fit Laser Beak in there somehow.

Agent Smith himself, Hugo Weaving was back as Megatron, and Candyman Tony Todd was the voice of the Fallen.

It also turns out that Megan Fox was not the only uber hottie this time around. Isabel Lucas played the character of 'Alice,' and this is one of the places where I feel that the movie earned its PG-13 rating. She's looking mighty hot in her slinky dress, and she's all but ripping Sam's clothes off. (Shia LaBeouf is sooo lucky!) As it turns out, though, she's some kind of Decepticon that we haven't seen before, which we find out as she almost jams her 8-foot long spiked tongue down Sam's throat.  (Here's a gallery of Isabel Lucas if you'd like to check her out some more.)

The other place that I think the movie really earned it's PG-13 rating is where Sam is pinned down and the "Doctor" is directed by Megatron to probe Sam's brain. Sending that slimy creature up through Sam's nostril (if I remember correctly) and almost sawing into his skull has to be pretty scary for younger kids.

How cool was it that Jetfire was included?  In the cartoon, Jetfire (called Skyfire) was a Decepticon that defected to the Autobots too. I really liked that and how Wheelie then decided to do the same. It was strange though how we just lost track of Wheelie at some point in the movie.

Now, for all of the haters out there, why do you hate this movie and/or Michael Bay so much?  Is it because of the explosions?  Well, what do you expect?  I mean, there are giant effing robot shooting at one another. Don't you think that's going to generate some serious firepower?  Or what, are you upset that this story is so different from any Transformers story/continuity that you are familiar with? Well, I'd encourage you to get over that too.  If you spend a few minutes on Wikipedia, you'll find out that the animated cartoon that you and I love so much wasn't even true to the comic book universe that was out around the same time. We've seen it with Batman, Superman, Spider-man, etc. Anytime you jump to a different medium there are going to be changes, which are needed to reach the audience.

Let's tackle the issue of racism. People are targeting the twins, Skids and Mudflap, as racial stereotypes. Well, that's pretty damn funny if you ask me. It's more like projection if you ask me. The people who are crying racism are projecting such onto the robots. Skin color is not portrayed by the robots, and they are not portrayed in dark colors. I'm pretty sure that black people are not the only ones that have gold teeth, and I'm pretty sure that there are illiterate white people.  In fact, if you've been paying attention through the movie, you know that much of the ancient issues surrounding the Fallen happened before the time of the Autobots.  Plus, they are so advanced in their communication, do they really need to read?  Will we need to read in 50 or 100 years? So who is to say that them not knowing how to read is a knock on their intelligence?

Besides, I really don't go to see a Transformers movie looking for a deep underlying social message or a moral to the story. I'm going to see Optimus and the other 'bots kick ass, Megan look hot, and Shia be hilarious in stressful situations with his character's parents, which he pulls off so well. Michael Bay, you gave us a great movie. Thank you!

In closing, here's a thought that I had earlier today. For all of the complaints and criticisms that this movie had, take the exact same movie and insert Samuel L. Jackson. Now, I wonder if people will criticize it the same or if it is okay for it to be over-the-top in areas because Sam Jackson's involved saying the occasional "muthafucka." 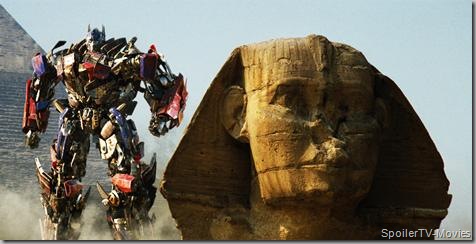 Here are all of the links I saved that have promo pics for the movie: