I made it out to see Terminator Salvation yesterday. Did I like it?  Well, first I'll say that I can't remember ever seeing a bad Christian Bale movie.  Secondly, I think this movie fit nicely into the Terminator mythology.  I thought that I had heard that this movie somewhat ignored Terminator 3: Rise of the Machines, but apparently that's not the case since Bryce Dallas Howard's character is named 'Kate' just like Claire Danes' character.  Kudos to McG and the others involved with this movie for not only making a great action flick but also staying within continuity. (FYI, Here's a link for Kate's wiki page. Normally, I'd just link it above, but it's spoilery if you haven't seen the movie.)

Now, I didn't do my normal marathon ritual and watch the first 3 movies prior to seeing this one.  I'm not sure why.  But I've feel like I've seen them enough times and after having watched the past two seasons of Terminator: The Sarah Connor Chronicles – I feel like I'm pretty well acquainted.

Well, I feel spoilers coming on, so the rest is after the picture below.

The movie starts off in an interesting fashion.  It focuses on 'Marcus Wright,' who is played by Sam Worthington.  It turns out that Marcus is actually on death row and is being asked by Helena Bonham Carter's character to donate his body to cancer research upon his execution.  There's an interesting exchange because she's obviously dying of cancer, and he says he'll do it in exchange for a kiss at which point he grabs her and plants one on her, then says, "So that's what death tastes like." As he then signs the release form, it's shown that the company sponsor is Cyberdyne Systems. Obviously at this point, even if you haven't seen the trailer for this movie but had seen at least the first or second movie of the franchise, you'd know what's going to happen.

Cut to 2018 and Judgment Day has happened some time ago, Skynet is running things, and John Connor is a mere grunt in the ranks.  This is obviously way before the events of the original Terminator movie because John hasn't met Kyle quite yet.  What's great here, is that this movie actually tells the story of both how John meets Kyle (his dad) and how the terminators begin experimenting with human tissue, which will be key to the whole time traveling endeavor. Later in the movie, we also get to see Arnold's "first" appearance (which as I'm checking out IMDb.com, may not have been Arnold at all but may have been Roland Kickinger, a look-a-like).

The one thing that bothered me a little, only because of my love of Terminator: The Sarah Connor Chronicles, was the absence of Derek Reese, Kyle's brother. I hope that TSCC will be taken as canon and perhaps Kyle and Derek can find one another in the next movie. It does seem like the character of Marcus planted the seeds for the whole idea of teaming up with a terminator.  I mean, I know this idea is not unique to TSCC since Arnold's terminator in T2 was sent back to do good, but it does seem like it was more fully explored in the TV series.

I think I read somewhere that potentially the next movie will once again explore the present day.  I'm interested, though, to see what would become of John Connor's child.  They hide it well in the trailers, but Kate is clearly pregnant in the movie.  Is there some great destiny attached to this child, I wonder?  Well, hopefully no one decides to come along and reboot the franchise, leaving us with another baby mystery like they're doing us with Superman Returns. 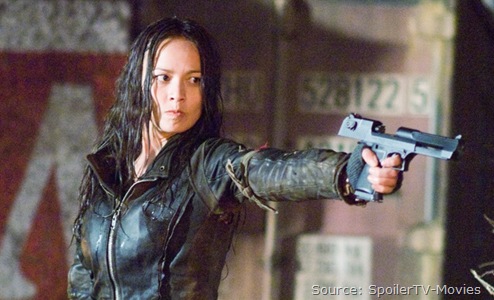