Mos Def guest starred as 'Lee.' He has starred in such movies as The Hitchhiker's Guide to the Galaxy and 16 Blocks, and he has also done the voice of 'Gangstalicious' on The Boondocks. 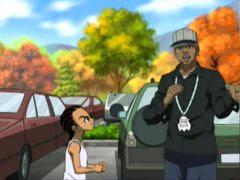 Chuck - "Chuck Versus the Broken Heart"

As if Chuck wasn't hot enough with regular star Yvonne Strahovski, this week featured guest star Tricia Helfer of Battlestar Gallactica fame as 'Agent Alex Forrest.' It just so happened that the opportunity presented itself for her to pose as a bachelor party stripper.

Kevin Kilner guest starred as 'Howard Amis.'  He recently guest starred on Dollhouse as 'Joe Hearn,' the handler that was raping 'Sierra' before 'November' went all "the third flower is green" and broke his neck on a coffee table.

Bones - "The Doctor In The Den"

Dana Davis, who guest starred as 'Michelle Weldon,' was previously seen in season 2 of Heroes where she played Micah's cousin 'Monica' who could copy whatever skill she saw.

Supernatural - "The Monster at the End of This Book"

Rob Benedict guest starred as the prophet 'Chuck Shurley.'  Here's a geek test for you. Do you remember him as 'Gibson' in the all too short lived Birds of Prey?  If not, then you may at least remember him as 'Calvin' from Waiting...