Eriko Tamura guest starred this week as the hot Asian step sister 'Kristin.' Although it may be difficult to recognize her in bikinis and other modern clothes, she played 'Yaeko' the swordsmith's daughter and love interest to Hiro and Takezo Kensei in season 2 of Heroes.  This makes two ex-Heroes cast members on the show currently, since Missy Peregrym played 'Candice' in season 1 of Heroes. 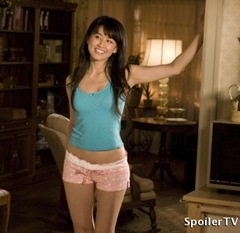 Atticus Shaffer guest starred as one of the kids at the space camp.  I like to refer to him as the Hancock kid, but he was also one of the creepy kids in The Unborn.