I finally went out to see Taken this afternoon, and I really enjoyed it. Before I give away any of the movie, though, let's review the cast. Liam Neeson (Batman Begins) playing 'Bryan,' Famke Janssen (X-Men) playing 'Lenore,' and Maggie Grace (LOST) playing 'Kim' are all fairly obvious. Now Kim's friend 'Amanda' was played by Katie Cassidy, who played 'Ruby' in season 3 of Supernatural. Pop star 'Sheerah' Holly Valance, who, in addition to playing a character in Prison Break that I don't remember, was also in the movie DOA: Dead Or Alive. The important thing to remember about her role in DOA:DOA is that she was the chick that did the bra trick with the gun.  My last honorable mention goes to Bryan's buddy 'Sam' played by Leland Orser, who was in one of my favorite movies Very Bad Things with Christian Slater.

And without further ado, spoilers after the image. 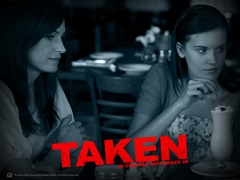 This was very much a Liam Neeson movie. The first part of the movie is setup, which you obviously need because you need to care that he finds his daughter. After the daughter gets kidnapped, the mom finds out and gets sad, the rest of the movie is about dad kicking ass. Don't get me wrong, I loved it. I really enjoyed Liam Neeson's portrayal of his character. I'm just wondering if it was necessary for the movie company to fork over the cash to pay Famke Janssen and Maggie Grace when they could have easily gotten lesser known actresses in those roles and it would have done just as well.

I mean, if I went to see this movie as a LOST fan itching to see Maggie Grace get tons of screen time, then I would be disappointed. This wasn't her movie. She played her part well, but I'm just saying that I think any actress could have. The girl that he finds with his daughter's jacket that leads him to the house with the red door… She did a great job too. Could she have just as easily played the daughter role? Very possibly. Maybe it would have been nice to have a surprise like that or like swapping actresses and having Famke show up unexpectedly as one of the prostitutes.

I digress though. I really enjoyed the movie, and I'm glad that things turned out the way they did. I LOVED the moment when Liam's character says, "You don't remember me, do you? We spoke on the phone two days ago, and I told you that I'd find you." Hell yeah!