The Last House On The Left - review

Sometimes when you go to see a remake, you might ask yourself, "Did I just pay $9 to see the exact same story I've already seen but with different actors and with cell phones?" Thankfully, The Last House On The Left should not have you asking that question. To me, they took the story, the basic plot, and asked, "How can we take a story that was told over 30 years ago and have it make sense today?" I think they answered the question pretty well.

I think the cast portrayed their roles well. I only recognized a few of them, though. Garret Dillahunt, playing the main bad guy 'Krug,' has been a regular on two of my favorite shows: Terminator: The Sarah Connor Chronicles and Life. Monica Potter, playing Mari's mother, has been in quite a few movies, including Con Air. Lastly, Martha MacIsaac, playing Mari's friend 'Paige,' was 'Becca' in Superbad.

Now for the spoilery part of the review after the image. 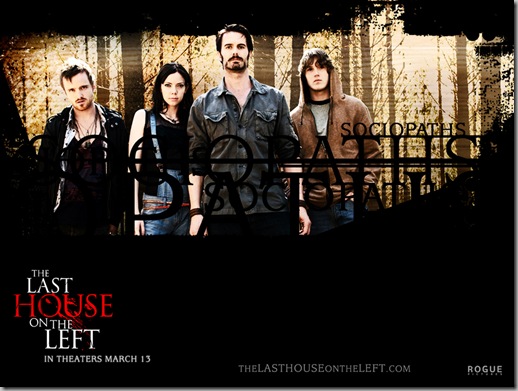 As I sometimes like to do, I watched the original this evening prior to going to see the remake, which allowed me to refresh my memory. As classic as the 1972 version is, there are definitely some things that are silly by today's standards… maybe even by any standards.  In the remake, there are no bumbling policeman as unnecessary comic relief, no talk of rebellion against bras, no "I'm going to name you 'Willow.'" I'm really glad that the goofy police were done away with, as well as the talk of renaming the kid "Willow." The hippie references worked in 1972, but we aren't burning bras or channeling flower power these days.

There was also surprisingly less nudity (Sadie's the only one that loses her top, but they are nice), and there was also less violence against the two girls. Paige (not 'Phyllis' this time) still dies, but she's not implicitly raped off-screen in the hotel room like in the original. She's also not made to pee on herself or make out with Mari during the traumatizing experience. This group of villains is still mean, but not quite as sadistic.

Although the violence against the girls was toned down, I think that the violence against the villains was cranked up. Thankfully, there was no cock-biting this time. I don't think I could have taken seeing that twice in one night. The first guy, Francis (originally 'Weasel' in 1972) gets a bottle broken over his head, stabbed in the chest, beat up, partially drowned, has his hand mutilated in a garbage disposal, and then finally dies by a hammer to the back of the head. In the 1972 version, this is the guy that died by have his cock chomped off.

I maybe be mixing up details, but I think that Sadie gets shot in bed in this version too. I know that a fight ensues (topless), and after some battle where she's using a shower curtain rod as a weapon against Mari's dad, the mom shoots her in the eye. In the 1972 version, she got her throat slit in the pool.

If you've seen most of the previews for this movie, then you already know what happens to Krug at the end, and when I say the end, this is actually the last thing they show us. Mari's dad, still a doctor in this version, has paralyzed Krug from the neck down because he's out of rope and duct tape. Next thing you see is him gently lifting his head into the microwave where he sets the timer and starts him cooking. So the last thing we see in the movie is an exploding head! In the 1972 version, Krug was done in with a chainsaw.

The happily-ever-after part of the movie is that Mari lives, and so does Justin (Krug's son). He's not a little shit in this version of the movie. He's actually a decent kid that didn't want the girls to get hurt and actually tipped off the parents that the people he was with were the ones responsible.