Tonight I went to the midnight showing of the new Friday The 13th.  I really enjoyed it, but before I even get into that, I have to mention a the first trailer they showed.  It was for the upcoming written and directed by Quentin Tarantino movie Inglourious Basterds. (Yes, I spelled it right.)  I’m typically not a big fan of war-themed movies, but this is one that I do not plan to miss. As if the mere mention of Quentin Tarantino’s name wasn’t enough, it’s also starring Brad Pitt, which could be his grittiest role since Fight Club, and Eli Roth, the crazy mastermind behind Hostel I & II and Cabin Fever.  Interestingly enough, I thought I recognized another face in the trailer, and after checking IMDb, I realized that it was B.J. Novak that I recognized. He plays ‘Ryan the temp’ on The Office, so it will be interesting to see him in a very different role.

Well, enough about the trailers. Time to talk about the movie.  I really enjoyed the movie, more than I thought I would. You could even tell from the early trailers that it was going to be quite a different take on the Jason character. I mean, he’s running. Jason doesn’t run. He does he sort of Pepe Le Pew thing and supernaturally shows up right where you’re running.  Before I say too much more, I’ll put a spoiler warning here. I mean, I’m not sure how it’s possible to spoil a predictable horror remake, but nevertheless, spoilers after the picture. 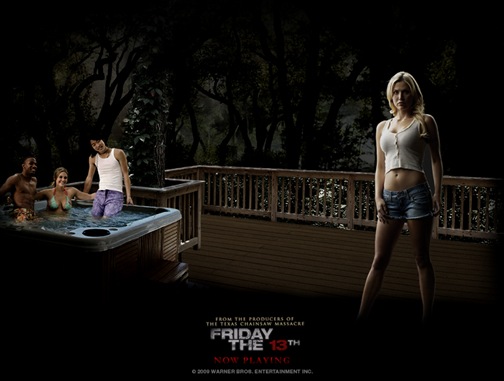 Well, it’s not too hard to figure out from the trailers, but there is one group of campers that include Whitney Miller (played by Amanda Righetti) that go “missing,” which prompts her brother Clay Miller (played by Jared Padalecki from Supernatural) to go looking for her and, in turn, get mixed up with the second group for campers comprised of Jenna (played by Danielle Panabaker), who teams up with Clay, the topless girl behind the boat, and some others.

What’s great is that the timing for the first group to be killed is perfect. It doesn’t take too long, but it’s not over too quick either. It’s also not all hack and slash and tear either. One girl is roasted over an open fire in her sleeping bag while her boyfriend watches since he’s caught in a bear trap with his leg half broken off. During part of the process of all of this, it’s revealed that Whitney looks like Jason’s mom did when she was young, so she’s the last one that Jason attacks. And just as he attacks her, the screen quickly goes black. You wonder whether he killed her or whether he spared her since she maybe reminded him of his mom. But you really can’t process all that right now because out of the black appear red letters that say Friday The 13th, and you realize that you just saw Jason Voorhees brutally murder at least 4 people before the title of the movie ever came on the screen. The entire theater applauded!

You can probably imagine how the rest of the movie goes, so I’ll skip ahead. Clay and Jenna survive and somehow decide to go back to the cabin where Jason has been living.  Fortunately, they hear Whitney down below where Jason has been keeping her in some underground mine shaft. (Wait, why is a mine shaft under a camp ground?) Of course, they don’t quite make it out before Jason shows up. Jenna dies, and Clay and Whitney keep running. After quite a struggle, and with some help from Whitney distracting Jason, Clay is able to get some good fighting in. He winds up being hanged, a machete stabbed in his heart, and a wood chipper to the brain.  In the next scene we see Clay and Whitney rolling Jason’s body into the lake to put him to rest along with his mask and the locket with the picture of young Ms. Voorhees. WTF? Why not throw the machete down there with him too? This was the one part where I didn’t understand why they did what they did, but the great thing is that now we can have a part 2.