Most of this information was confirmed via http://imdb.com or http://tv.com.

The main patient on House this week in the episode titled "Painless" was Martin Henderson.

Why does Martin look familiar? He was the unfortunate victim of Samara in The Ring. Remember how he met his fate in the easy chair?

On this week's episode of Criminal Minds, titled "Bloodline," there were two significant guest stars. First was Adair Tishler, playing the part of 'Cate Hale,' unfortunately as a victim. You may remember her from Heroes as 'Molly Walker.'

Her kidnapper was played by Andrew Divoff. Andrew is known for his role in Wes Craven's Wishmaster but more recently as 'Mikhail Bakunin' (or as fans called him 'Patchy') on LOST.

Speaking of LOST, in the second episode, titled "The Lie," Michelle Rodriguez guest starred. I know she used to be a regular cast member, but I really thought it was neat that she made a surprise appearance.

This week's episode of Knight Rider,

titled "Knight to King's Pawn," featured the voice talents of Peter Cullen as K.A.R.R. Although Peter Cullen has done plenty of voices over the years, he is most famous for his portrayal of Optimus Prime in both the animated series and, most recently, the live-action movie.

While technically not a guest star, this week's episode of The Office, titled "Prince Family Paper," featured a very heated debate regarding the hotness of Hilary Swank.

This week on Supernatural the episode was very humorously titled "Criss Angel Is a Douche Bag."

Towards the end, the bad guy was revealed to be played by Michael Weston, who you may remember as 'Lucas' the private investigator earlier this season on House or as 'Private Brian Dancer' for a few episodes during season 6 of Scrubs.

During Bones' second episode Thursday night, titled "Fire in the Ice," we got to see Marisa Coughlan as 'Agent Payton Perotta.'

If she looked familiar to you, then you were probably remembering her from Super Troopers where she played 'Ursula.'

The other guest star, whom we only saw briefly, was Bianca Lawson.

Bianca played 'Kendra' the short-lived slayer in season 2 of Buffy the Vampire Slayer.

Finally this week on Batman: The Brave and the Bold,for the episode titled "Fall of the Blue Beetle," ex-Star Trek: The Next Generation cast member Wil Wheaton performed the voice of the late Blue Beetle, Ted Kord. 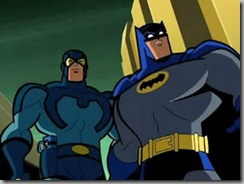 Did I miss anyone? Let me know if you saw anyone you recognized that I missed.